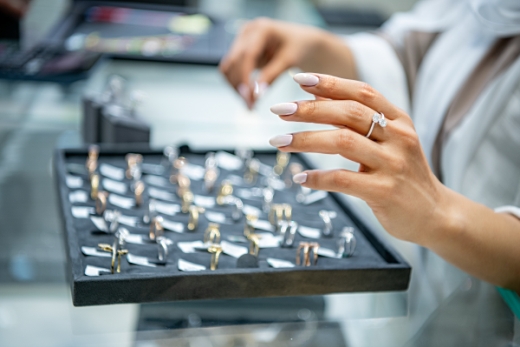 RAPAPORT… Jewelry was the US’s best-performing retail category in December compared to pre-pandemic levels, according to Mastercard SpendingPulse.

Revenue from the segment rose 27% for the month compared to the same period of 2019, Mastercard said Thursday. Proceeds jumped 31% year on year.

“Retail sales in December closed out the year on a high note,” the company noted. “This follows a robust holiday season.”

Total retail sales grew 7% year on year, while online purchases surged 14%. Revenue for all categories climbed 8% versus two years ago, with e-commerce up 60% from 2019’s figure.

Jewelry enjoyed the fourth-highest year-on-year increase out of the major categories, behind restaurant spending at 52%, other luxury goods at 47%, and apparel at 46%. Compared to two years ago, apparel was the second-highest sector after jewelry, with restaurants and luxury taking the third and fourth positions.

Sales growth is likely to ease in 2022 due to economic factors, according to the National Retail Federation (NRF). After a year of unusually high imports, which led to a shipping backlog, orders are expected to stabilize.

“Economic indicators are giving us a paradoxical view of the direction of the US and global economics,” said Ben Hackett, founder of Hackett and Associates, which releases the Global Port Tracker together with the NRF. “The atmosphere of uncertainty is likely to have an impact on demand going forward. We are already seeing short-term growth rates declining, and we believe trade growth is returning to normal levels, reflective of economic factors. We do not expect that double-digit expansion of import volumes will continue in 2022.”